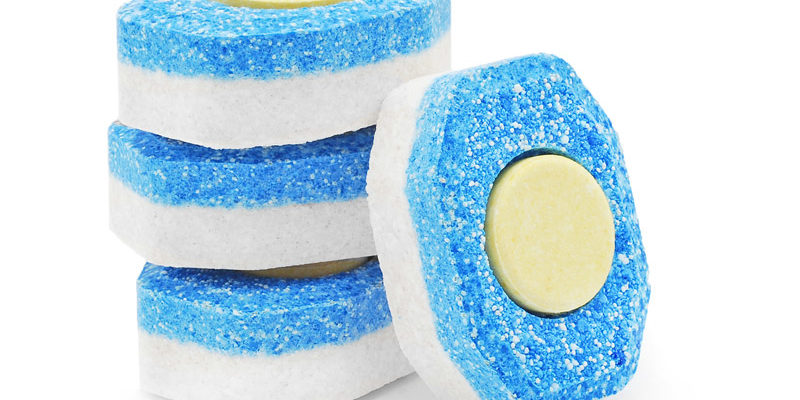 Since the EU regulation on phosphorus limitation in automatic dishwashing detergents (ADWDs) entered into force in January 2017, sodium citrates have become a well-established alternative to phosphates as environmentally friendly builders for ADWDs. An innovative alternative to the commonly used sodium citrate dihydrate (TSC) is the anhydrous form of sodium citrate (TSA) which has an active content of 100%. TSA has excellent tableting properties and can be used as a carrier for liquid active substances due to its porous structure. In that regard, surfactants are of special interest because they are often liquid or waxy and therefore represent a particular challenge in dry formulations (e.g. tablets). An advantageous combination of the two active substances can be achieved by loading TSA with surfactants. Loading TSA with surfactants shows that free-flowing TSA-surfactant powder can be produced. This loading step allows for easy handling of raw materials and, in the final application, excellent tablet properties.

The challenge of producing modern automatic dishwashing detergents
One of the key trends in the automatic dishwashing detergent (ADWD) market is the increased popularity of multifunctional all-in-one products with the main format in Europe being tabs and powder. When changing from the traditional combination of classical detergent, water softener, and rinse aid to a singular multi-benefit product, consumers are not willing to make any concessions in the cleaning performance. Since January 1st 2017, the EU-regulation for the limitation of phosphorus in automatic dishwashing detergents has been in effect. [1] Before the new regulation, sodium tripolyphosphate was commonly used as the main builder ingredient in ADWD formulations. In this context, sodium citrate, usually in its dihydrate form (TSC), has proven to be an ecologically friendly alternative, and has established itself as a “green builder” in phosphate-free ADWDs. It is able to chelate hard water ions, buffers the pH of the washing liquid and is compatible with all other dishwashing detergent ingredients. Furthermore, it is free from phosphorous and thus not eutrophic. Sodium citrate is not only readily biodegraded by many organisms under aerobic conditions, but also under anaerobic waste water treatment conditions and in the natural environment. An innovative water-free alternative to sodium citrate dihydrate is its anhydrous form (TSA), which can be loaded with liquid actives due to its porous structure.

Nowadays all-in-one dishwashing tablets contain different systems, each with a distinct purpose. Examples include builder systems (i.e. builder, co-builder, polymers), bleach systems, enzymatic systems, alkalinity systems, and surfactant systems (i.e. rinse-aid, drying). Formulations typically consist of several different ingredients, the majority being powders. Surfactants are a typical exception with their liquid or waxy appearance. This leads to limitations in production and also increases the complexity of storage, dosage, and manufacture of ADWD formulations. One way to manage these drawbacks is the usage of a carrier system for the surfactants. In this study, the performance of TSA as a carrier for rinse surfactants will be evaluated by analysing the powder and tableting properties of TSA loaded with two market pertinent rinse surfactants.